The creation of the Court represented the culmination of a long development of methods for the pacific settlement of international disputes, the origins of which can be traced back to classical times.
Read More

The International Criminal Court (ICC), governed by the Rome Statute, is the first permanent, treaty based, international criminal court established to help end impunity for the perpetrators of the most serious crimes of concern to the international community.
Read More

The international human rights movement was strengthened when the United Nations General Assembly adopted of the Universal Declaration of Human Rights (UDHR) on 10 December 1948. Drafted as ‘a common standard of achievement for all peoples and nations’.
Read More 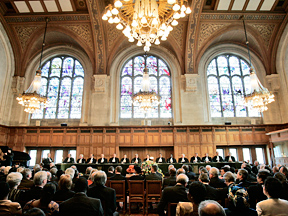 International Law defines the legal responsibilities of States in their conduct with each other, and their treatment of individuals within State boundaries. It also regulates the global commons, such as the environment, sustainable development, international waters, outer space, global communications and world trade.
Read More

Promoting Human Rights and International Law through Training and Accreditation